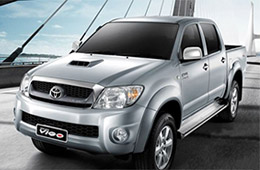 Toyota Pickups are synonymous with hard-working lifestyles. And because of this, Toyota pickup spare parts are often needed to keep these wonderful vehicles on the road. They cover hundreds of thousands of miles (requiring maintenance and replacement parts) and are often used (or abused) as tools more than they are cared for like many other vehicles, such as passenger cars. By far the most popular Toyota pickup truck is the Hilux. The Toyota Hilux was first introduced in 1968 and has been a reliable workhorse for millions of drivers ever since. It has even been driven as the star of several television shows and adventures. For example, the BBC tried to show how indestructible they are in a show in 1988 and then drove a slightly modified Hilux to the North Pole. It was also the first 4x4 vehicle to reach the South Pole. 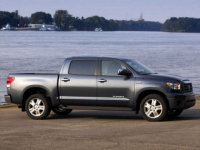 How and why is the Toyota Hilux (and its brothers bearing different name badges) so good? The first models were manufactured only in Japan, and soon made a name for thewww.dealer-spareparts.comlves as extremely reliable vehicles, which also offered comfort, frugal economy, and performance. With their popularity growing so fast Toyota decided to start assembling the vehicles, and producing Hilux spares, in countries other than Japan. The seventh and latest version (known as the Hilux Vigo in many markets) is mainly produced in Thailand then shipped out to countries all over Asia, the Middle East, Australia and New Zealand. 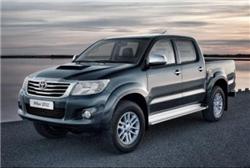 At www.dealer-spareparts.com we have thousands of Hilux spare parts at the lowest prices ready to be transported to customers all over the world. The vehicles' popularity here in Thailand is just one reason that we consider ourselves to be both fortunate and the best place to buy from. Both OEM and genuine Toyota pickup spare parts are manufactured in factories near Bangkok, and the vehicles thewww.dealer-spareparts.comlves are assembled in Chachoengsao, a bordering province that offers excellent access to local ports. For some markets, and during different generations of Toyota pickups, different names are used for identical or similar vehicles. The Toyota Tiger, Surf, Tacoma, Mighty X, and Champ are all names which have been used over the years or in certain countries. 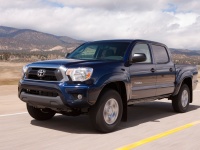 However, under the skin, the spare parts and replacement parts, these vehicles are basically the same as each other. Due to the vehicles from different countries being the same as each other, items such as Hilux Surf parts or Hilux Surf spares are the exact same items as for another Toyota pickup truck with a different name. Yes, each range has differences, too. There are two and four-wheel drive variants, as well as naturally-aspirated and turbocharged engines, not to mention several body and cab options. Each vehicle will have different parts depending on its body, engine and drivetrain, but more parts are the same than are different. In addition, drivers, owners, and those buying or selling Toyota pickup parts should also be aware that several other vehicles (which are not classed as pickup trucks) are based heavily on vehicles such as the Toyota Hilux and its variants. For example the Toyota Trekker, Toyota 4runner and Toyota Surf are pickup-based SUV-type vehicles, and now there is the Toyota Fortuner, which is a more passenger-friendly version, but pickup-based, all the same.

Buying genuine or OEM Toyota pickup parts online needn't be a risk. We pride ourselves on both our honesty and our service. The long-term benefits of being a trusted Toyota parts supplier far outweighs the short-term profits of supplying incorrect parts, cheating customers, or delaying the delivery to save costs. We are a conscientious team of service-minded parts wholesalers, who also supply retail orders of any size, and for vehicles of any age or model. Please contact us by telephone or email for the best quotation for Toyota pickup spares. Unless customers specifically request OEM parts, we automatically quote for and supply genuine Toyota pickup spares. However, we are more than happy to give two quotations, or a mixture of genuine and OEM.